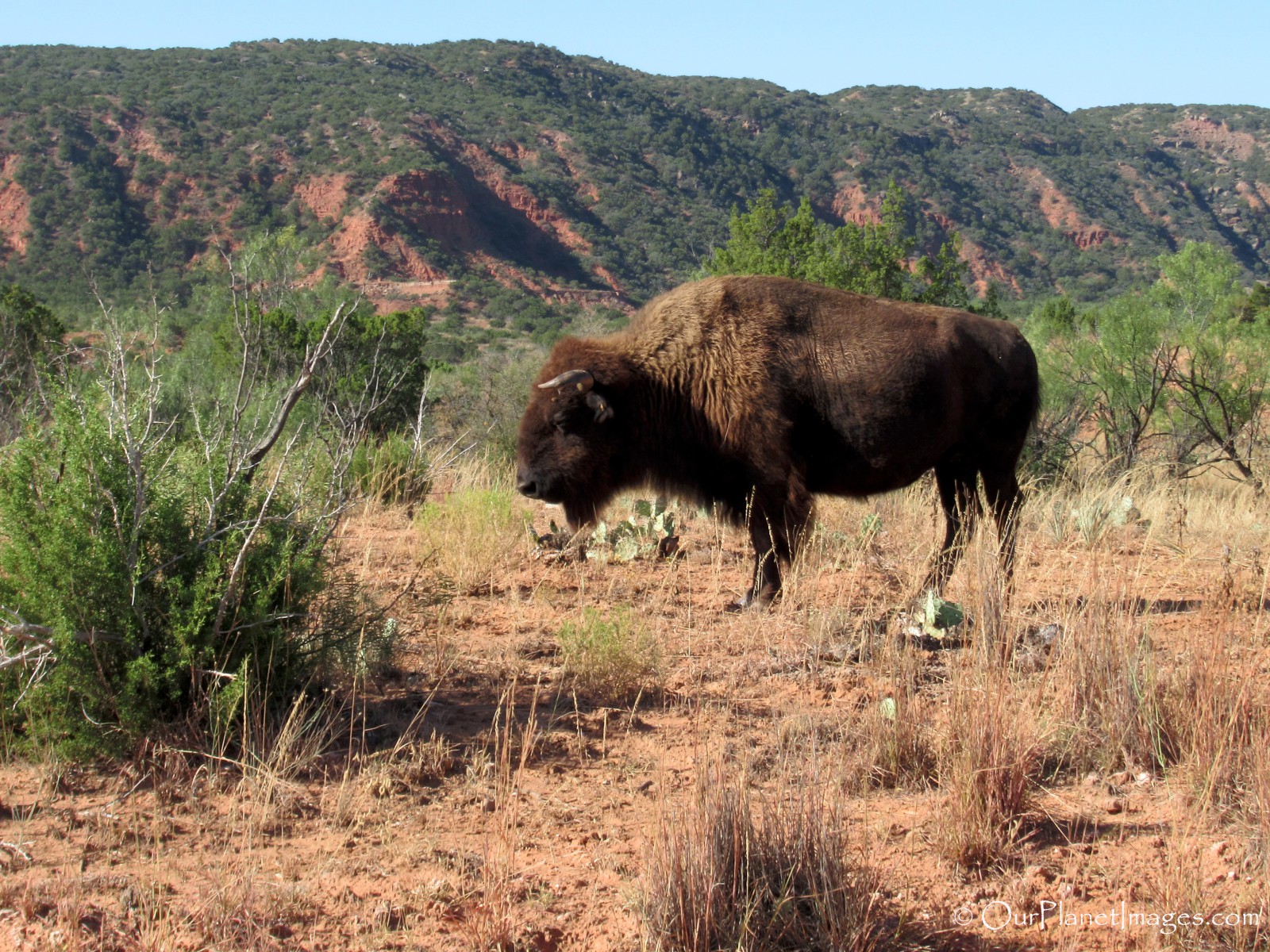 The American Bison are the largest land animals in North America. They are characterized by a hump over the front shoulders and slimmer rear legs.

Both the male and female bison have a set of short, sharply pointed horns that curve outward and up from the sides of their heads. Their head and front part of the body have a thick long coat of dark hair with adult bulls having a black beard that can reach about one foot long. The rear part of the body of covered with much shorter hair. This combination of having thick long hair on the front portion of their body and shorter hair on the back portion reminds me of a male lion.

Their long front coat becomes thickest in the winter which they use to insulate their body and it helps them to withstand blizzards as they stand facing into the cold wind. Their heavy coats are shed in the spring and they will roll on the ground to loosen the hair which fall off in large chunks. 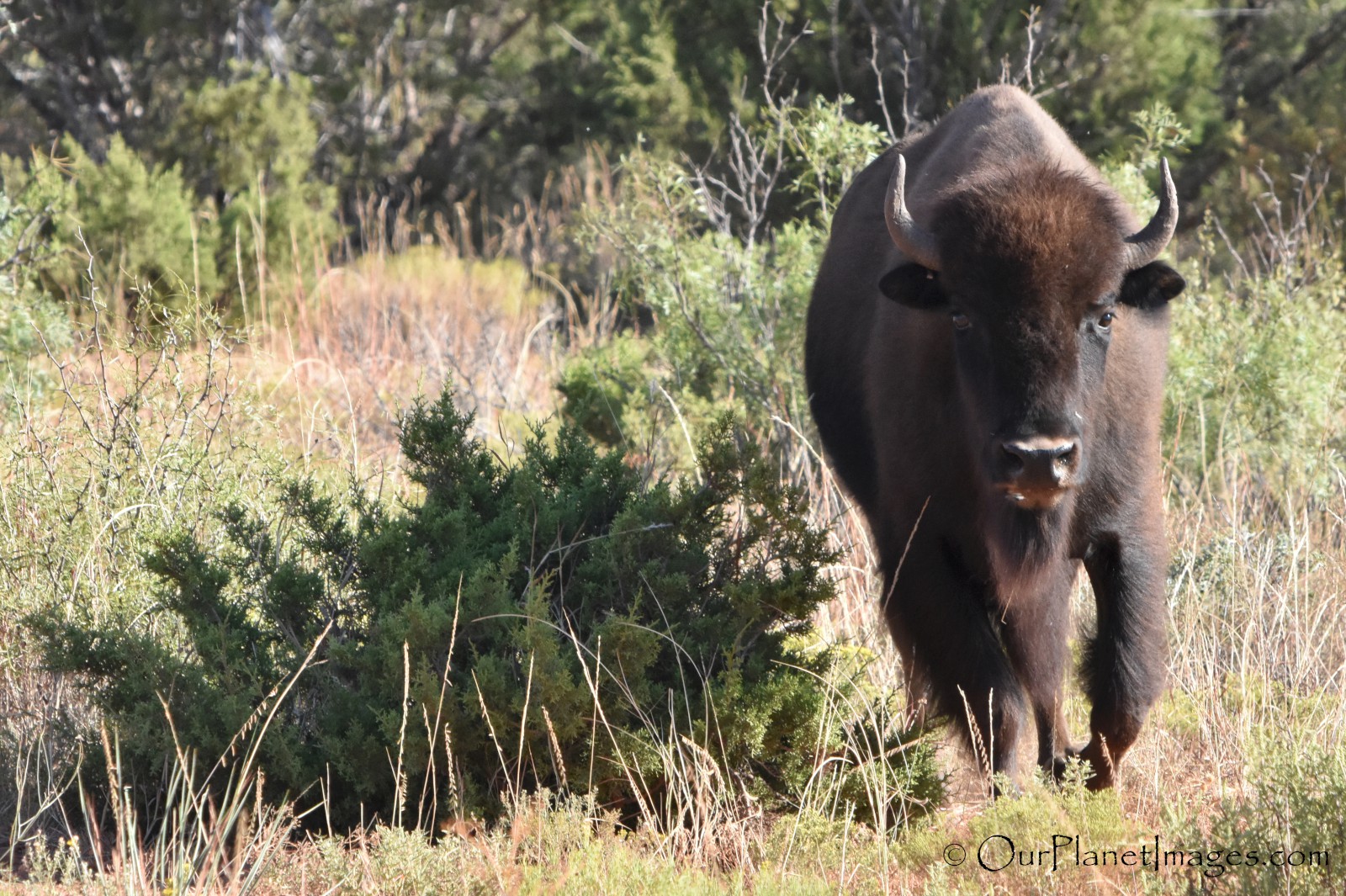 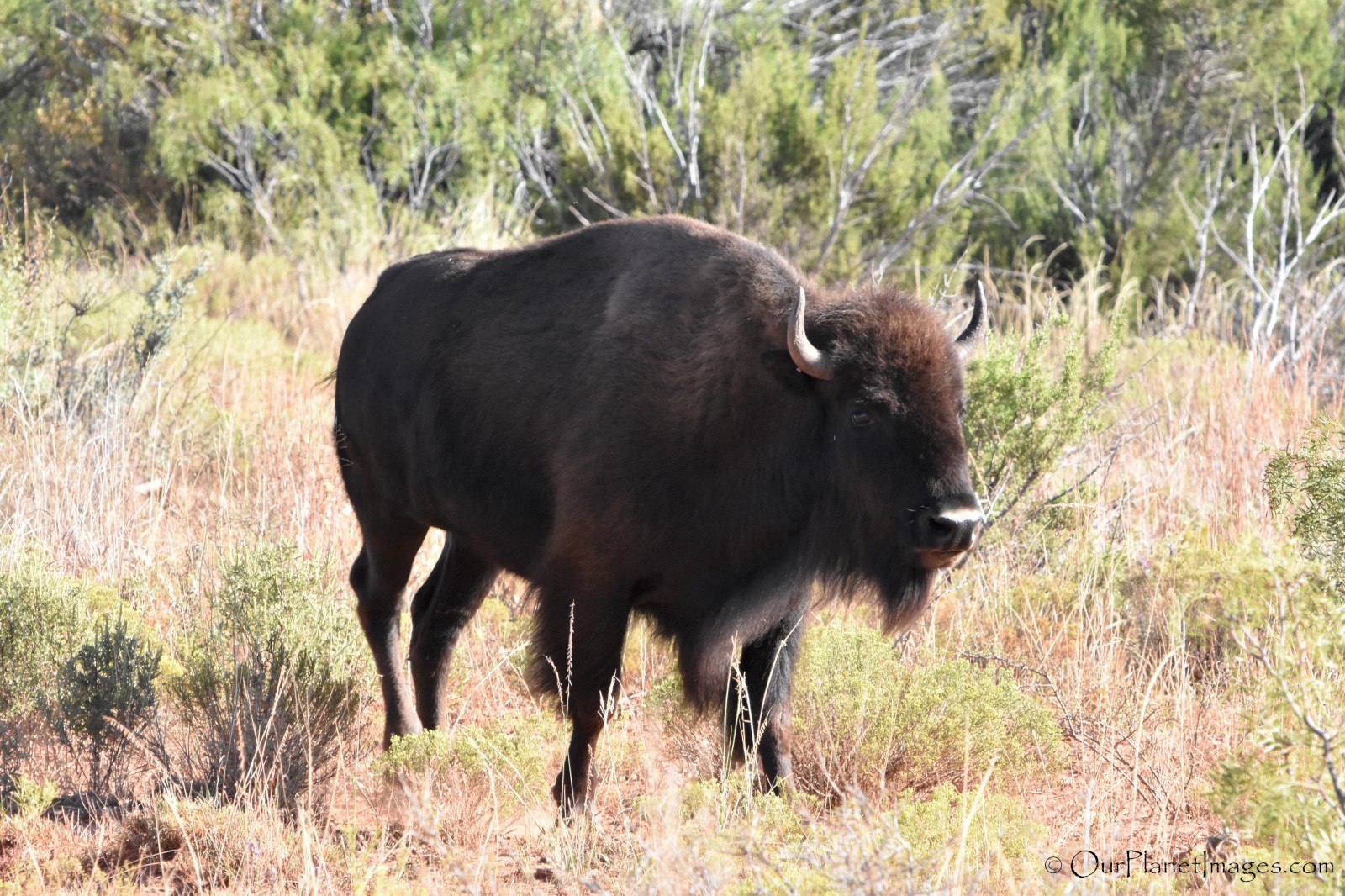 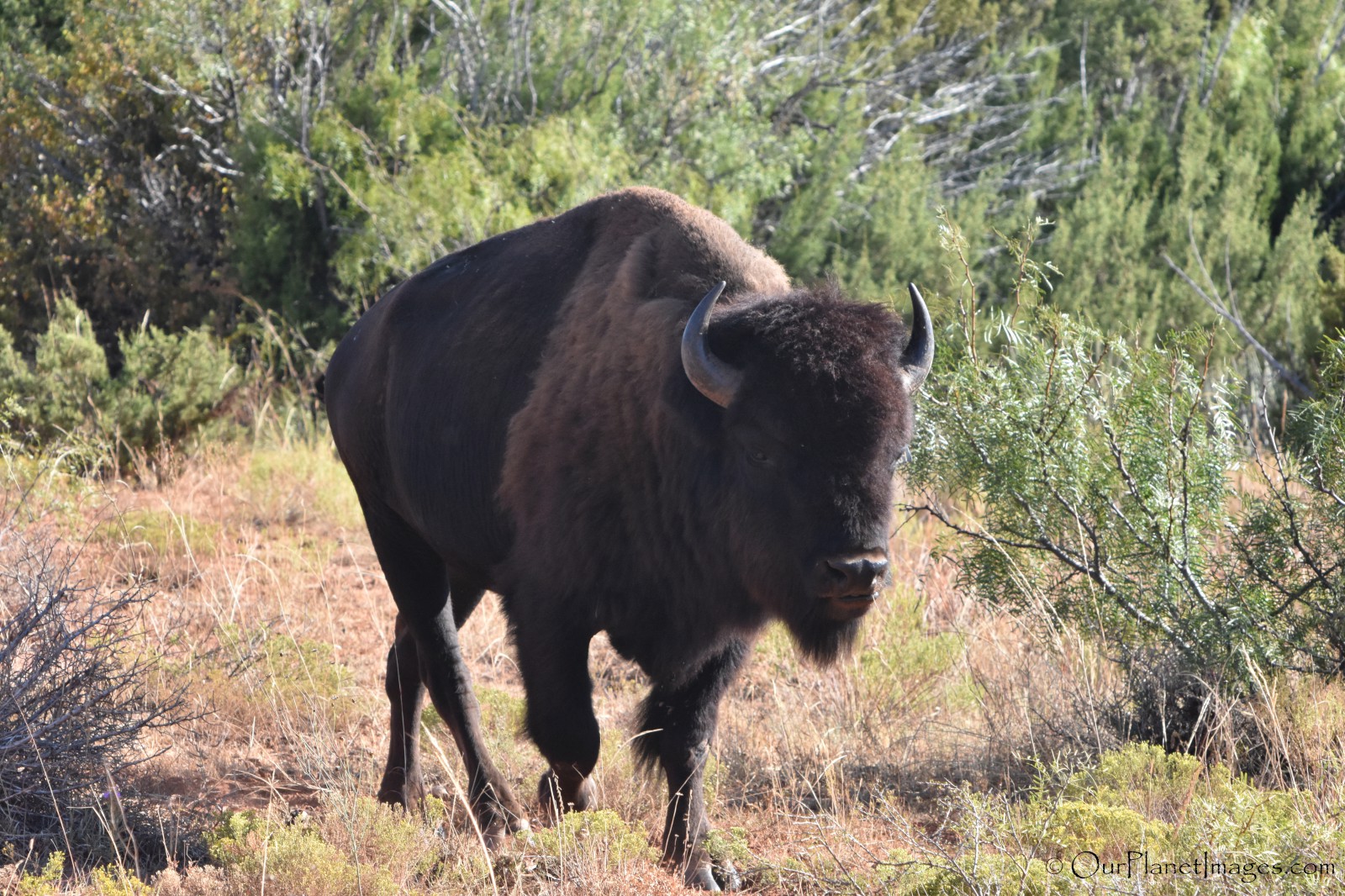 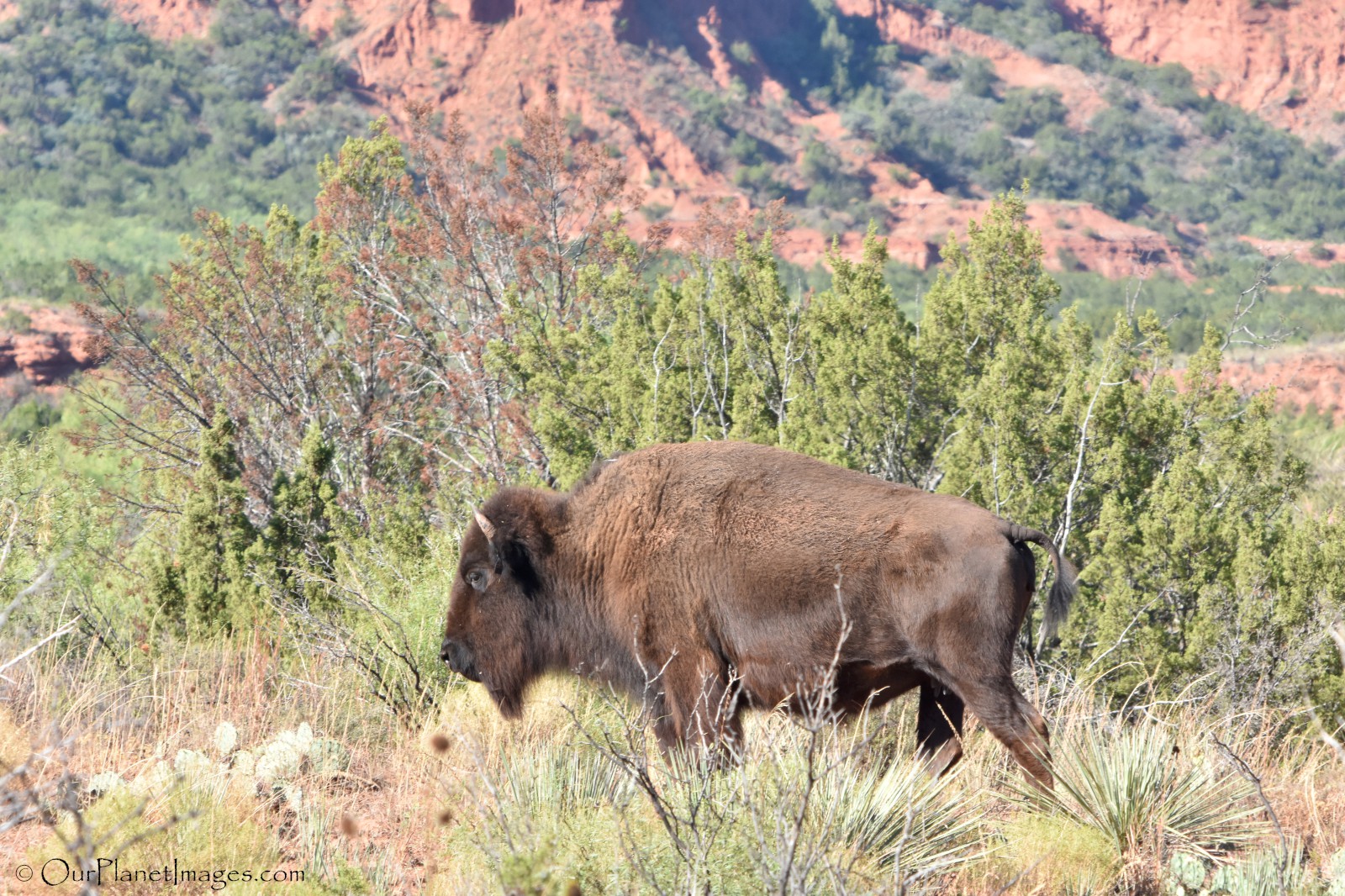 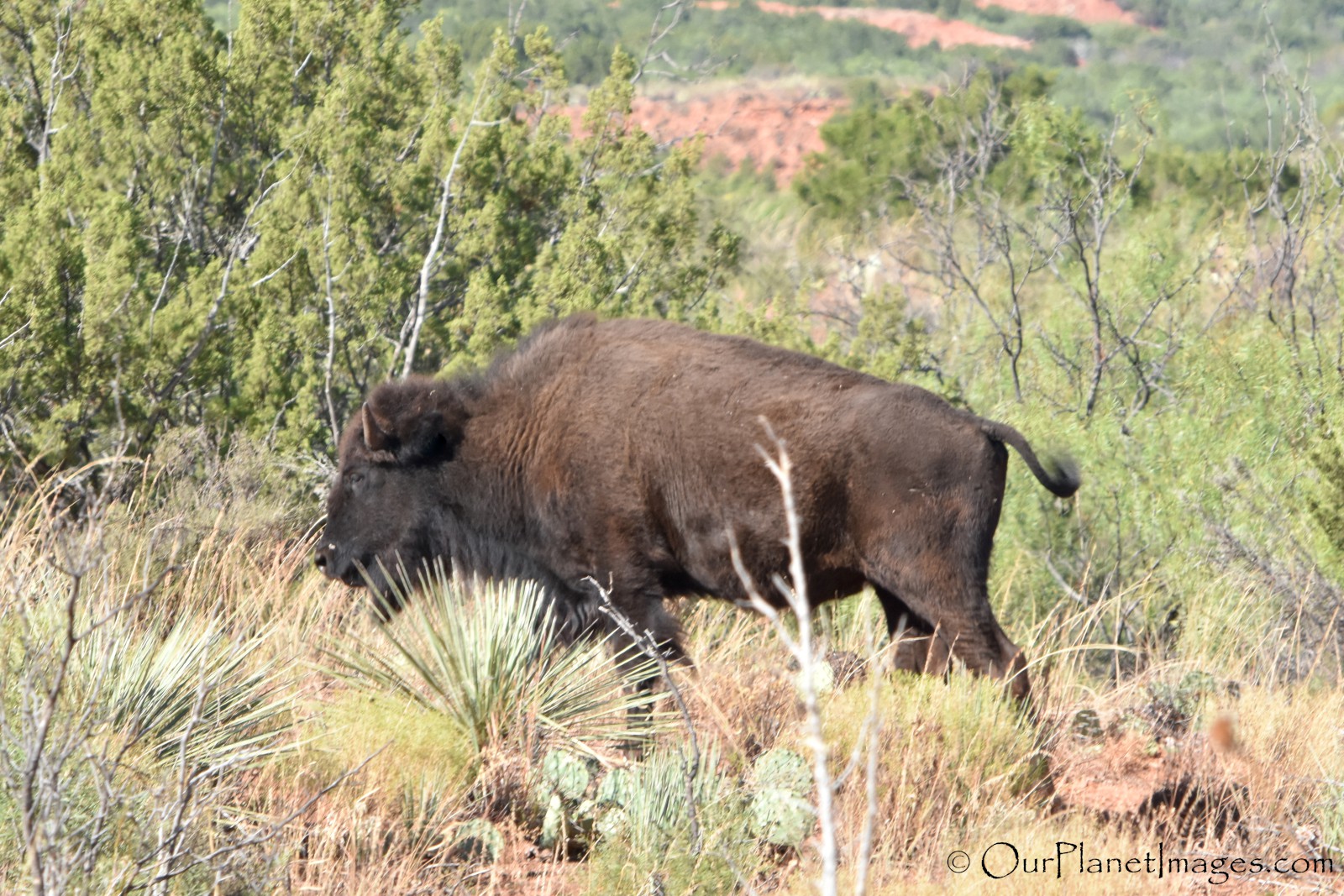 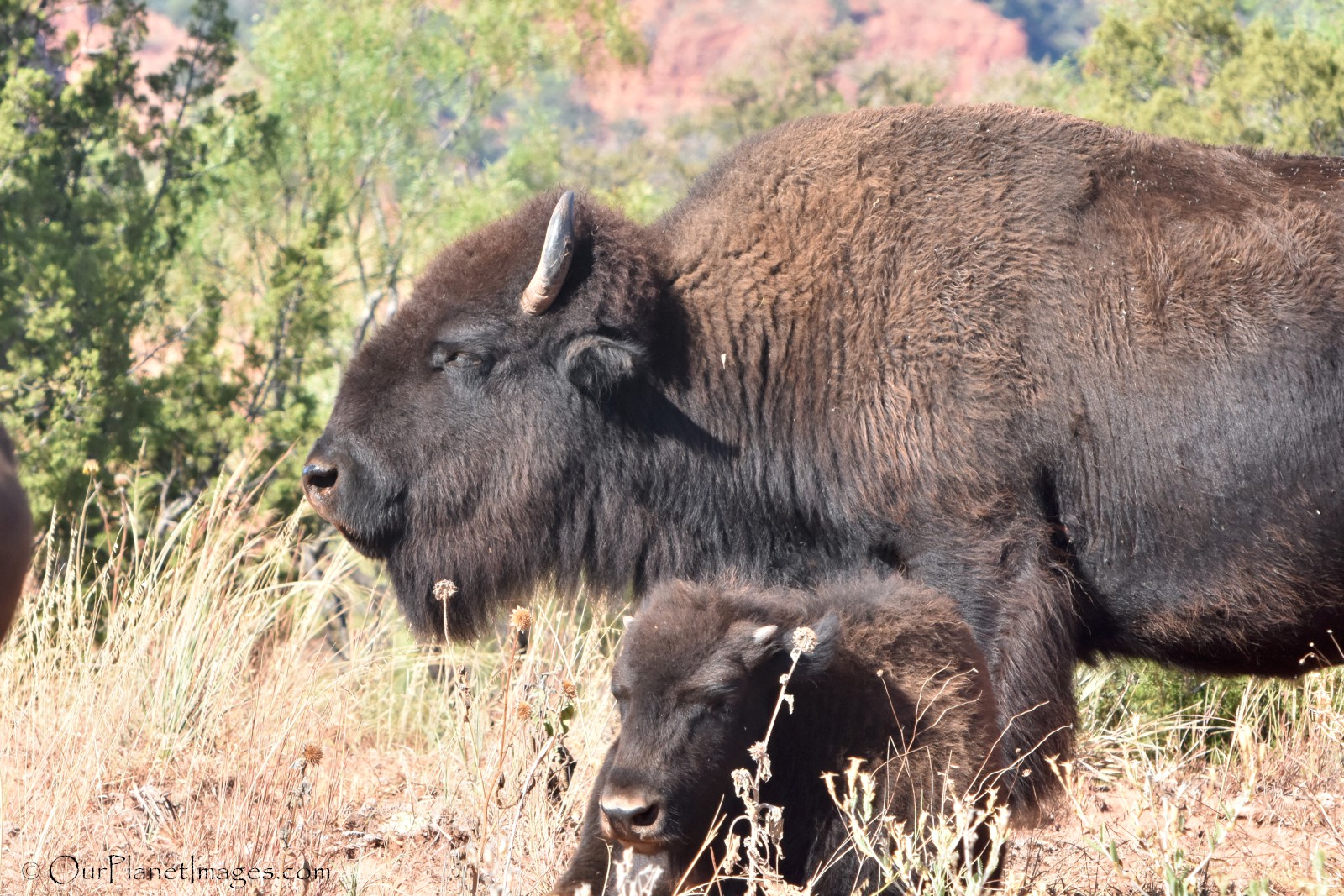 Bison prefer to graze in the morning, rest and chew cud in the middle of the day and then graze again in the evening. They will also roll in the dust or mud to keep cool. 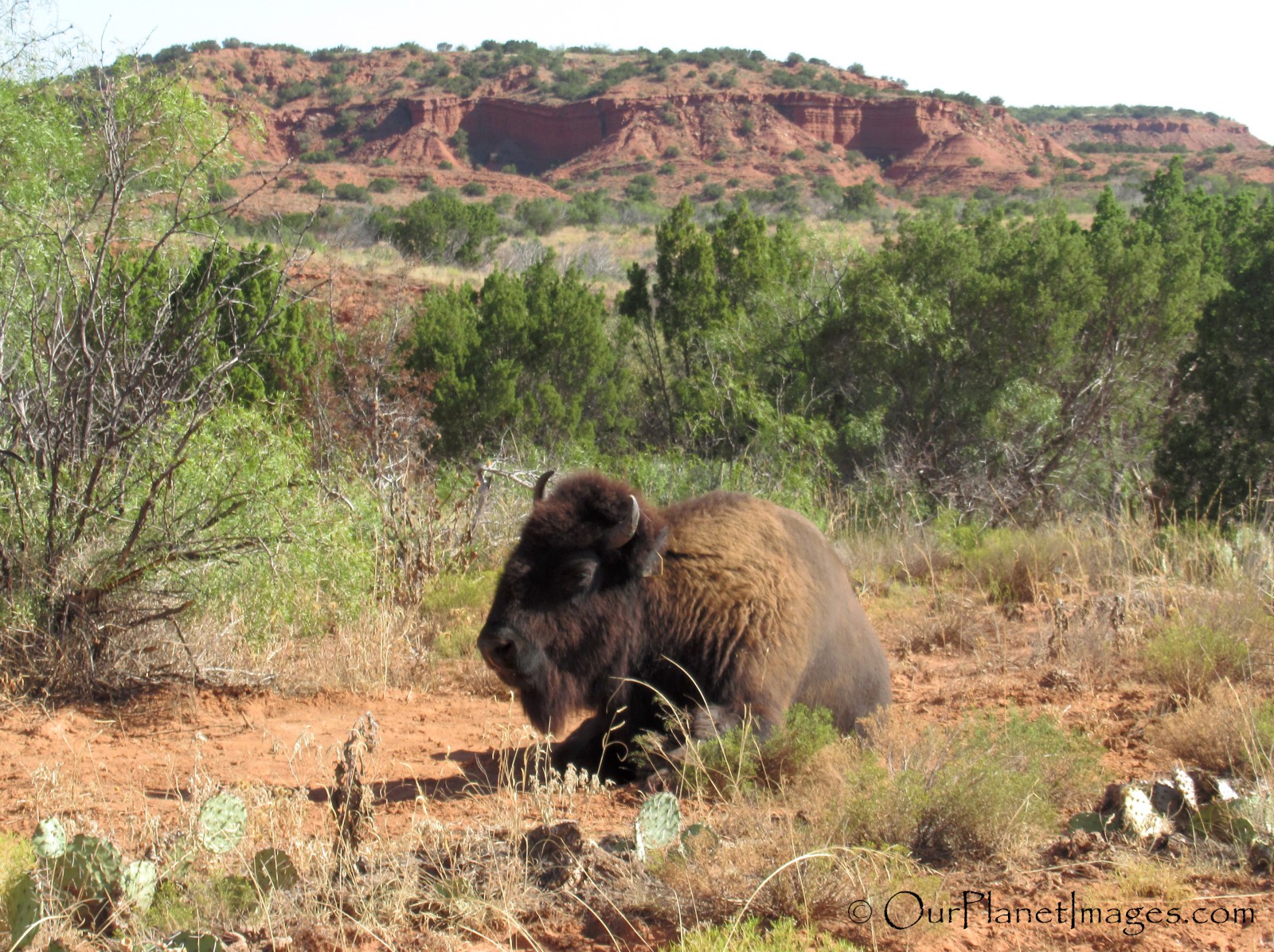 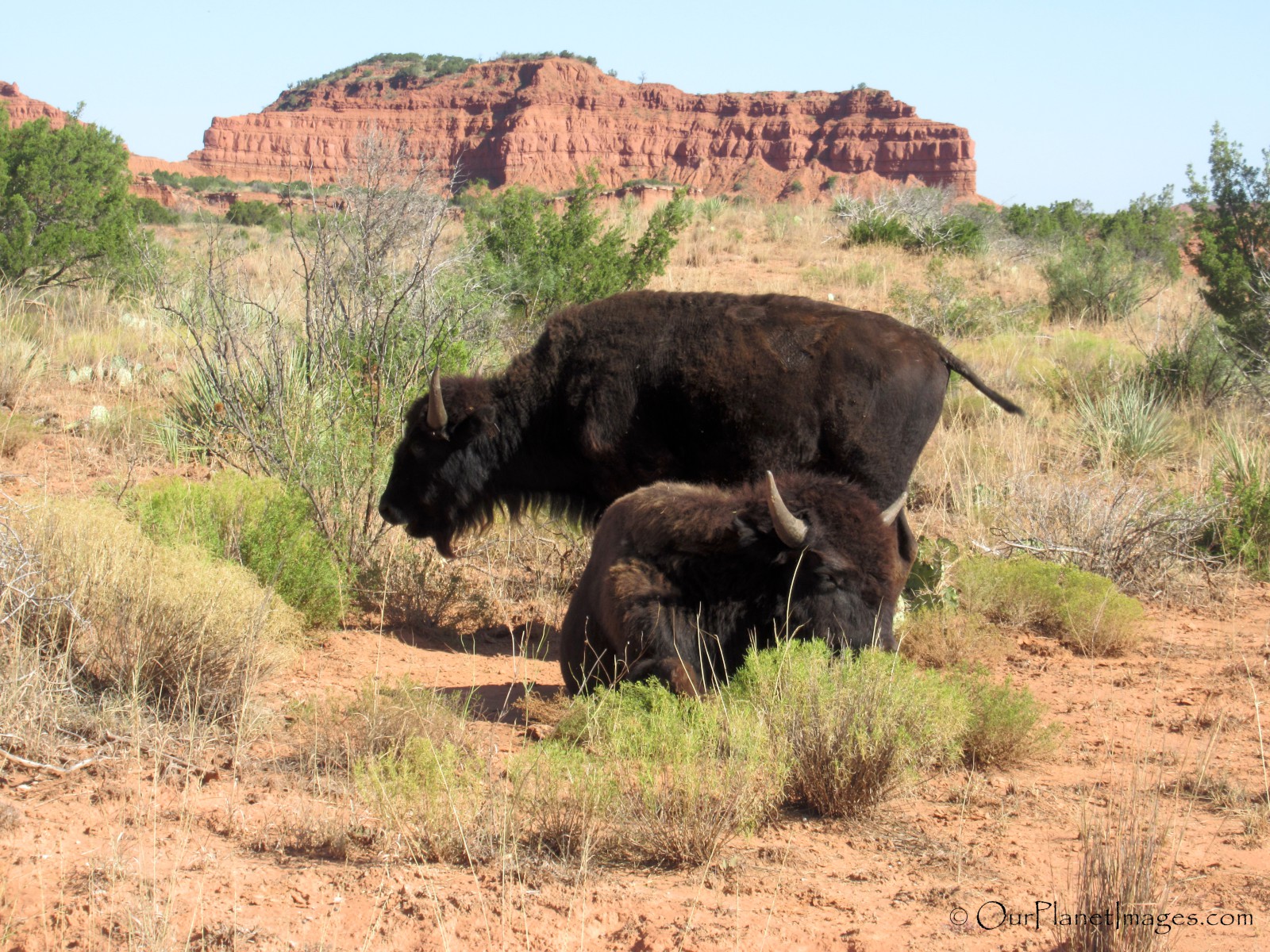 At one time, the American Bison were widespread from Alaska to northern Mexico but today their movements are greatly regulated and are primarily found in national parks, national wildlife refuges and a few state parks.

Today’s herds are very fragmented and can be found in parts of Alberta, British Columbia, Manitoba, Northwest Territories, Ontario and Saskatchewan in Canada. They are also found in Arizona, California, Idaho, Montana, South Dakota, Utah, Colorado, Alaska and Texas in the United States.

The above photos in this post are of the official Texas State Bison heard and were taken at Caprock Canyon State Park near Amarillo, Texas. The photos below are of a heard of bison that I happened across in the southern part of Utah near Zion National Park and I have also seen bison in Colorado but they were too far away for me to photograph them. 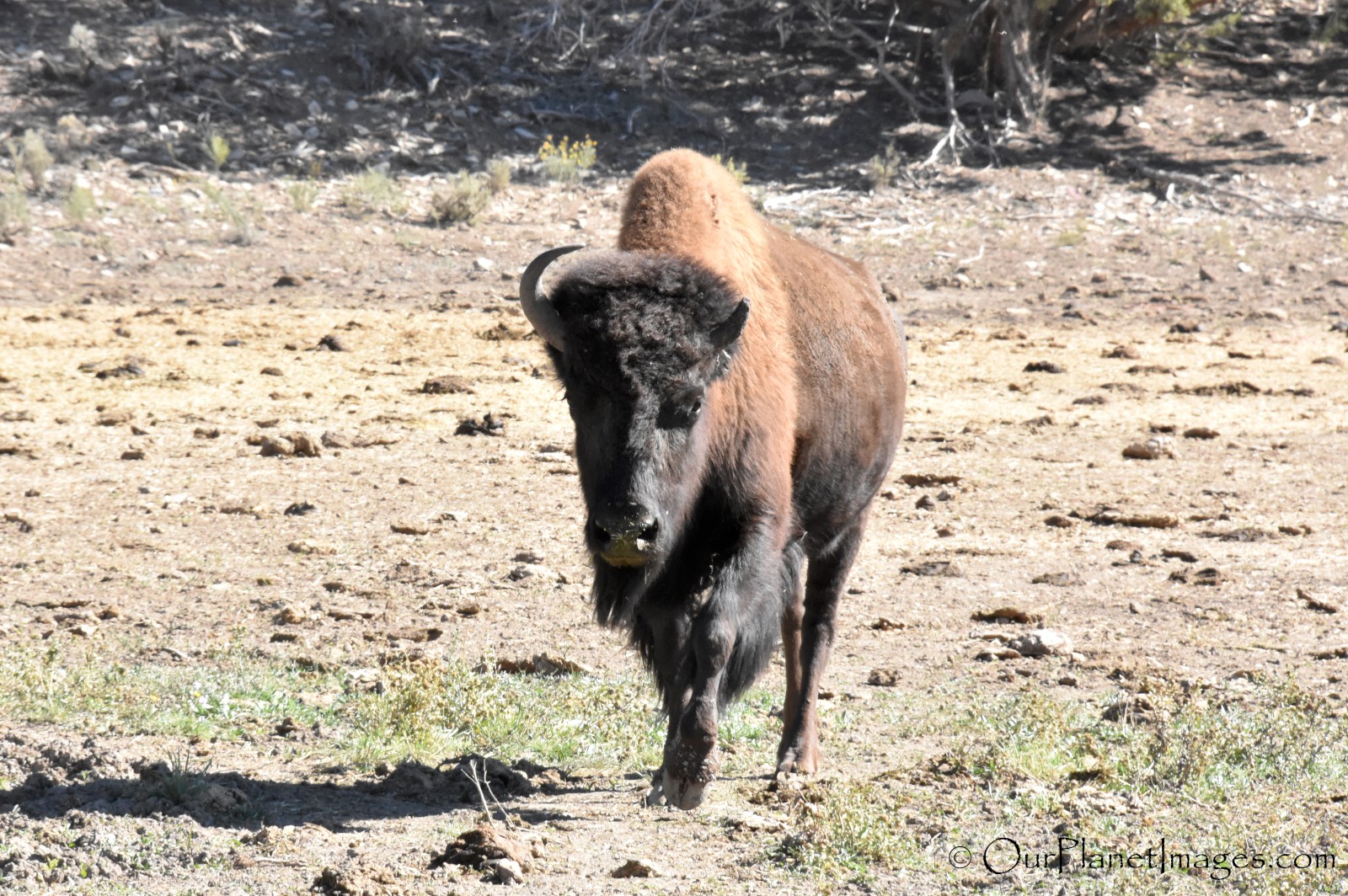 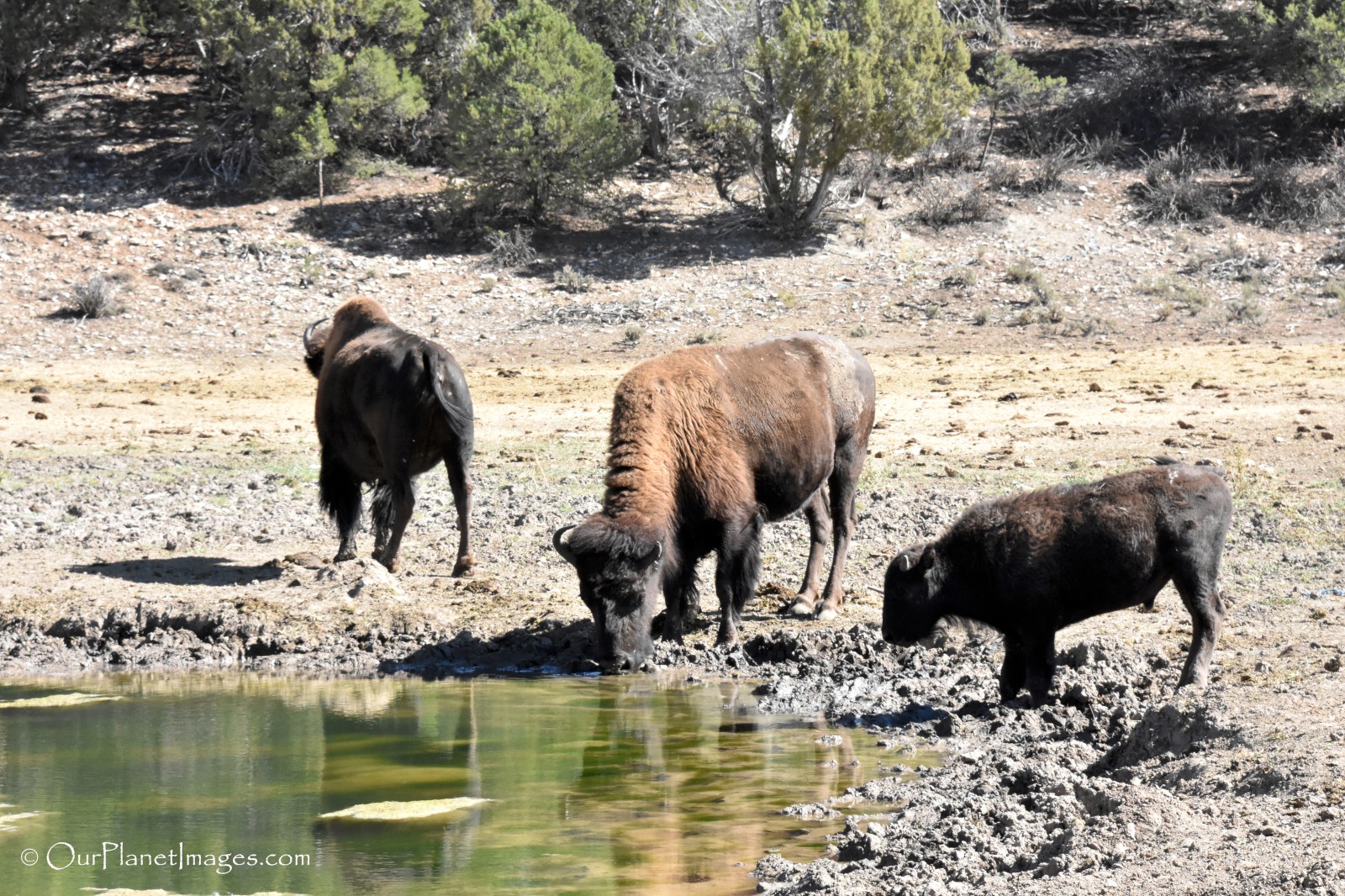 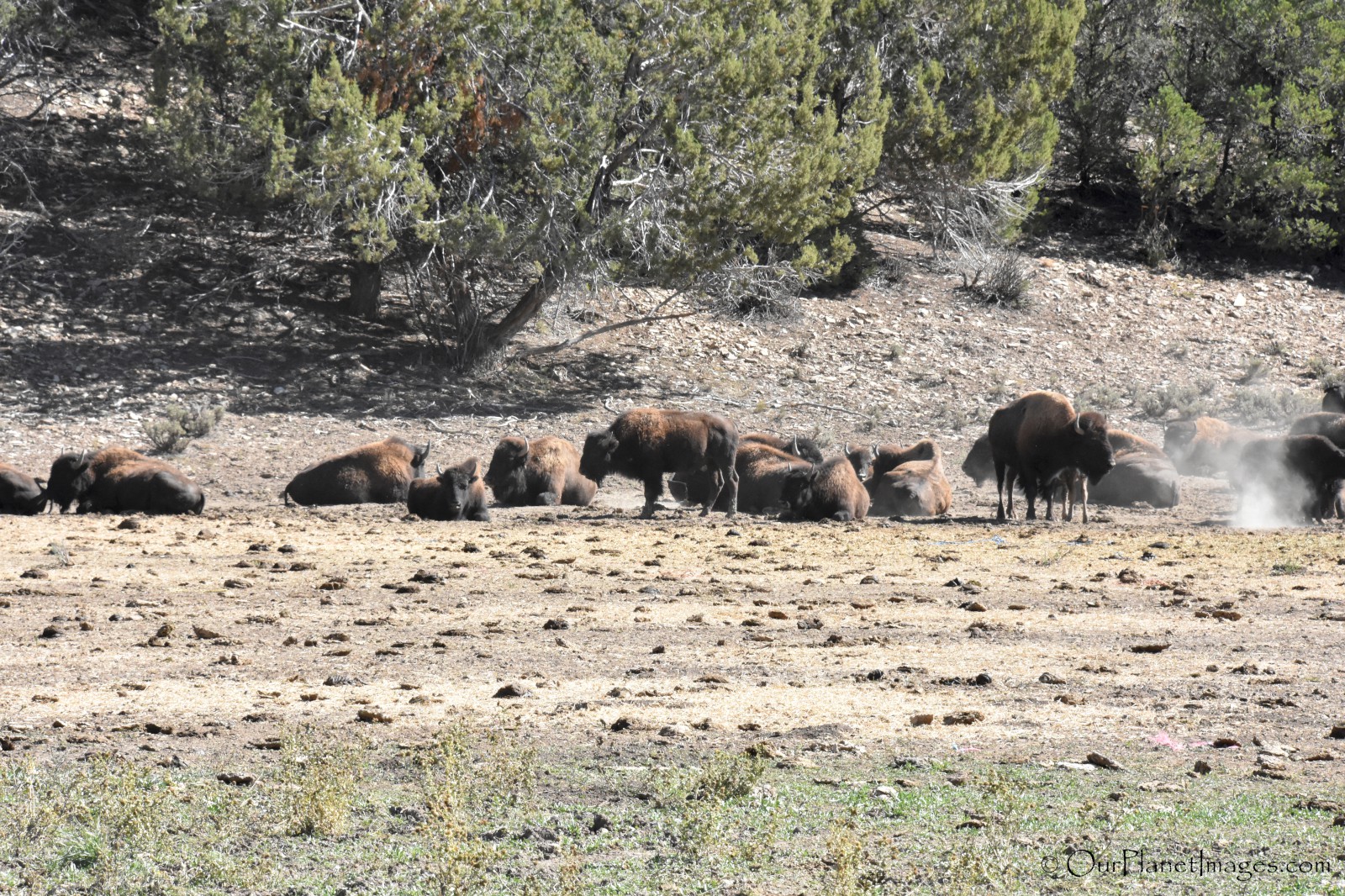 Location: Live in grasslands and prairies in North America.

Diet: Bison are year round grazers. They feed primarily on grasses but will also eat flowering plants, lichens and woody plant leaves. To find grass in the winter they will sweep their heads from side to side to clear the snow and reach the grass. Typically, bison will eat 1.6 percent of their body mass per day and require water every day. 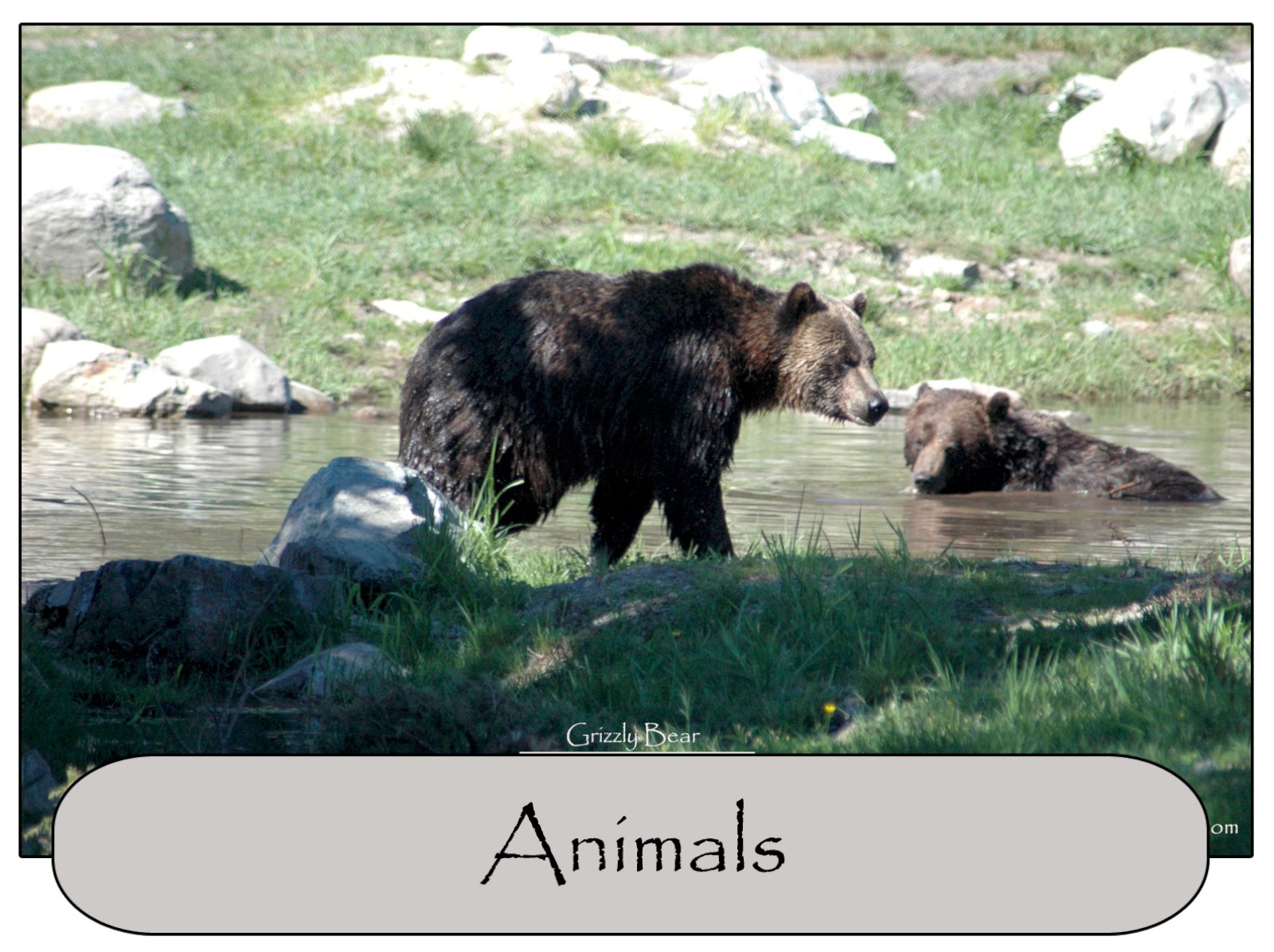