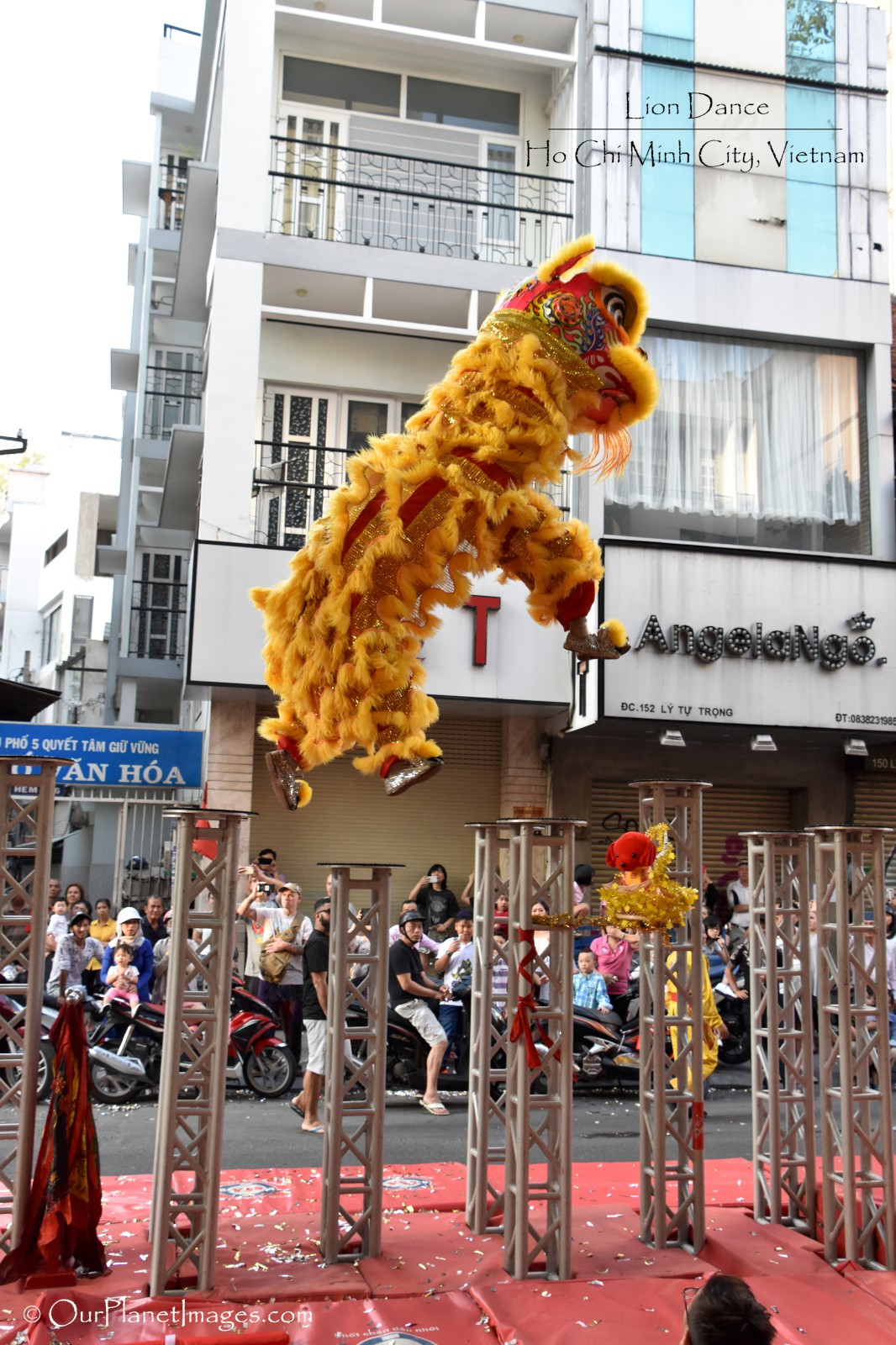 Being in Ho Chi Minh City during the Lunar New Year is a unique experience. Normally the city is very busy but on New Year’s Day the city seems almost deserted. It is really strange, the normally packed streets are empty, restaurants and stores are closed. Over the next few days thing start to re-energize. Each day after the New Year more places re-open.

Sometimes stores will not reopen until they have been visited by the performers of the Lion Dance. It is believed when a business visited by the Lunar New Year Lion Dance that evil spirits will be chased away and it brings good luck and fortune for the rest of the year.

For tourist, the Lion Dance is not advertised. They are performed in the street in front of the business and seeing a Lion Dance takes a little bit of luck but they are loud so if you are within a couple of block of the event then it is easy to find. Normally, everyone in the area will stop what they are doing and watch the show until it is over so it will become crowded.

The lion symbolizes power, wisdom and superiority and represents joy and happiness.

The Lion Dance is performed by two performers, one at the head of the lion and one at the tail. The head of the lion is made of Paper Mache. The eyelids and the mouth move constantly and enhance vitality and longevity while the motion of the lion’s tail sweeps away bad fortune and unpleasant things from last year. In the center of the lion’s head is a mirror that scares away evil and bad spirits. The evil spirit sees itself in the mirror and becomes frightened by their own appearance and runs away. 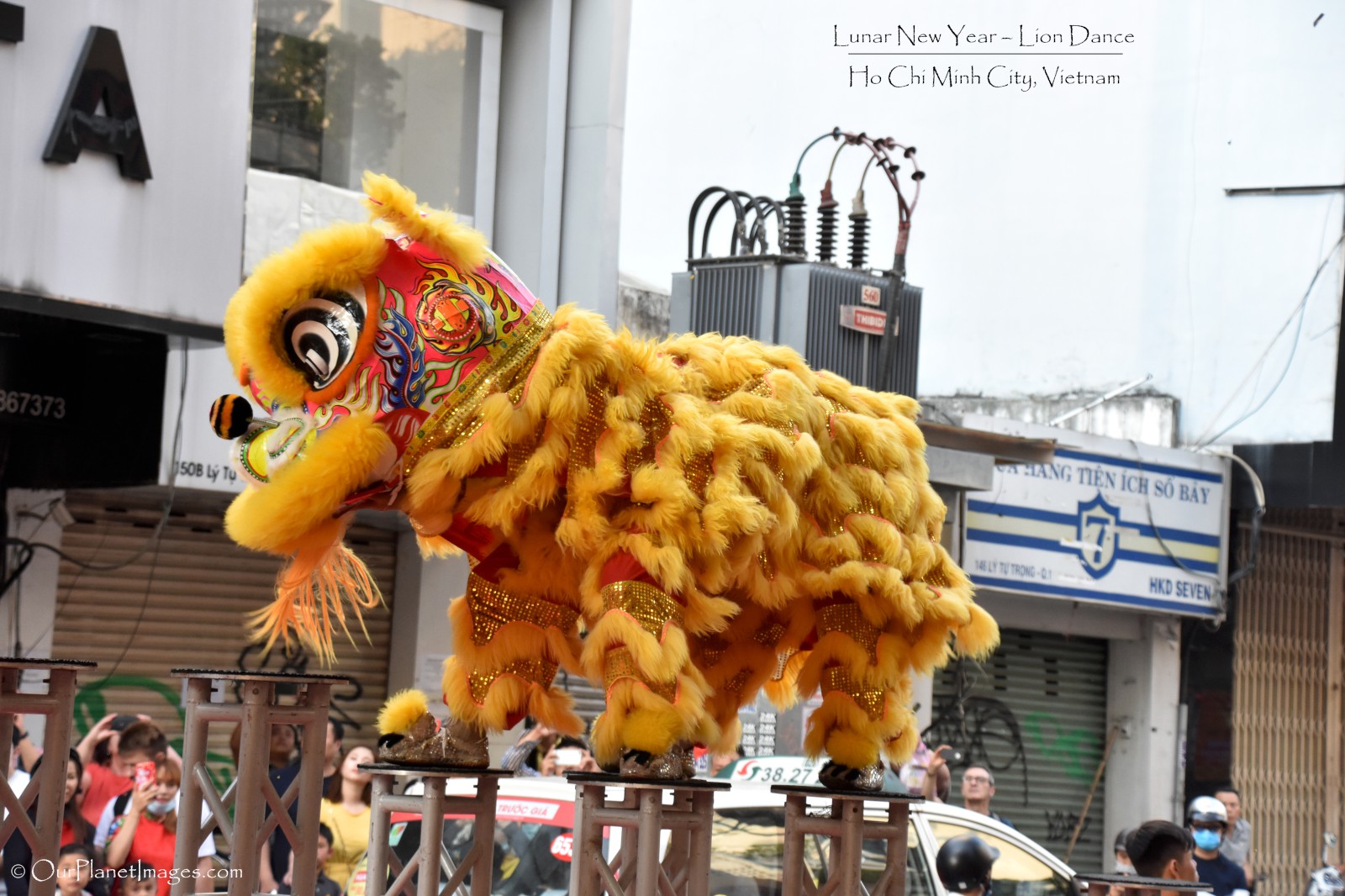 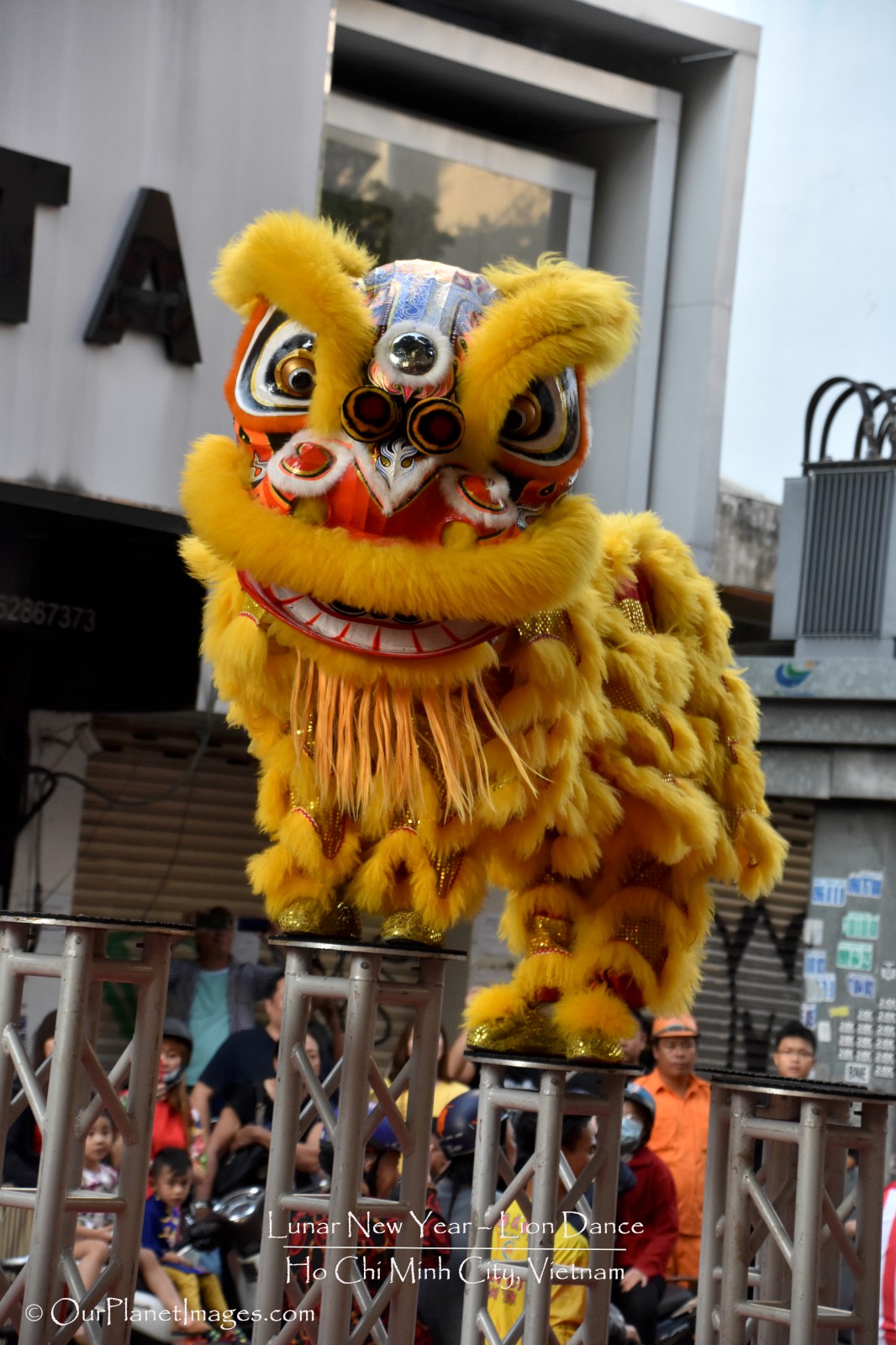 The southern Lion’s costumes have less hair and the hair is shorter. The southern lions also come in different colors and the color of the lion signify different things. The color meanings for Vietnamese are:

One of the lion dances that I saw had all three of these color lions. 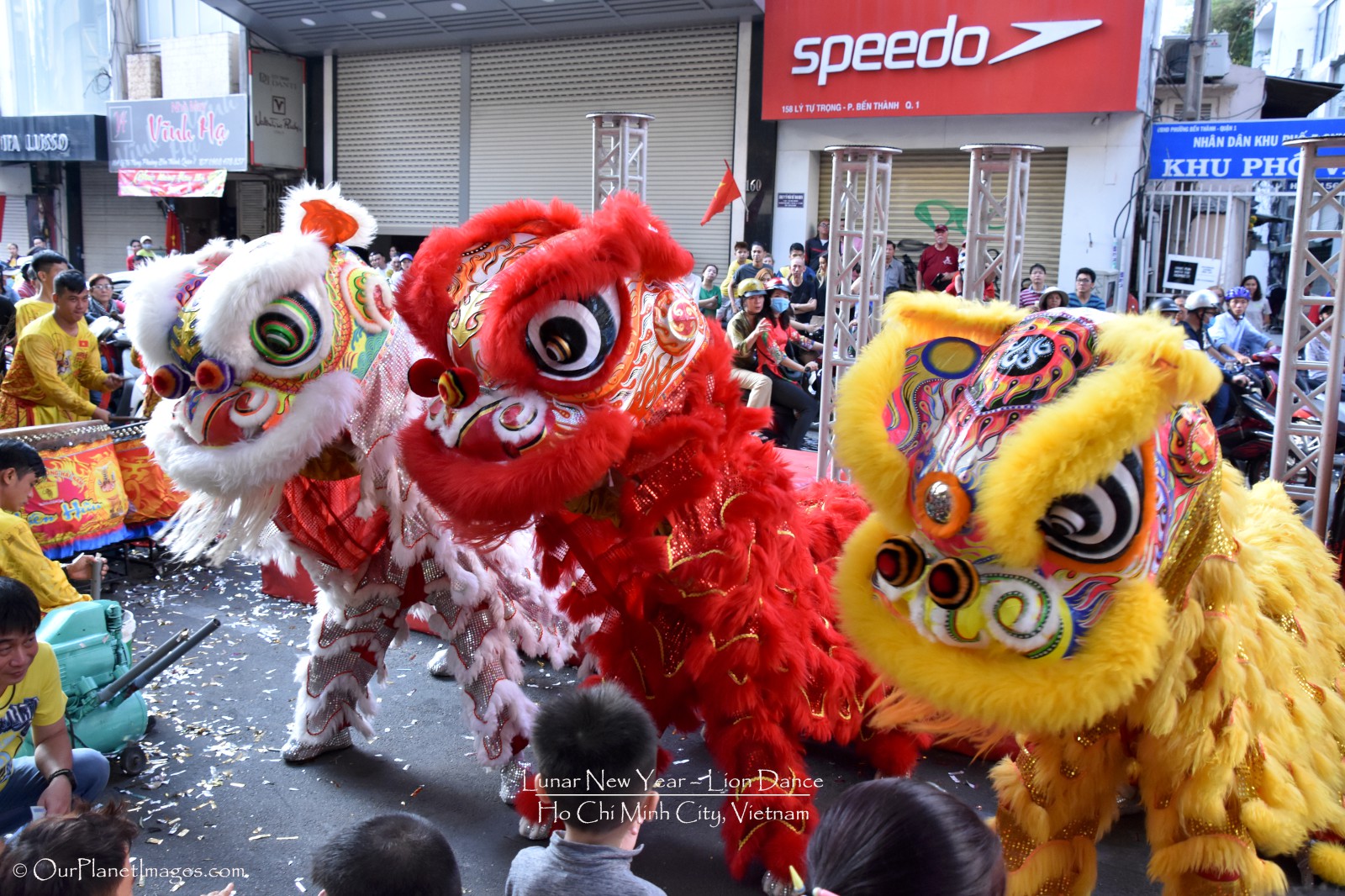 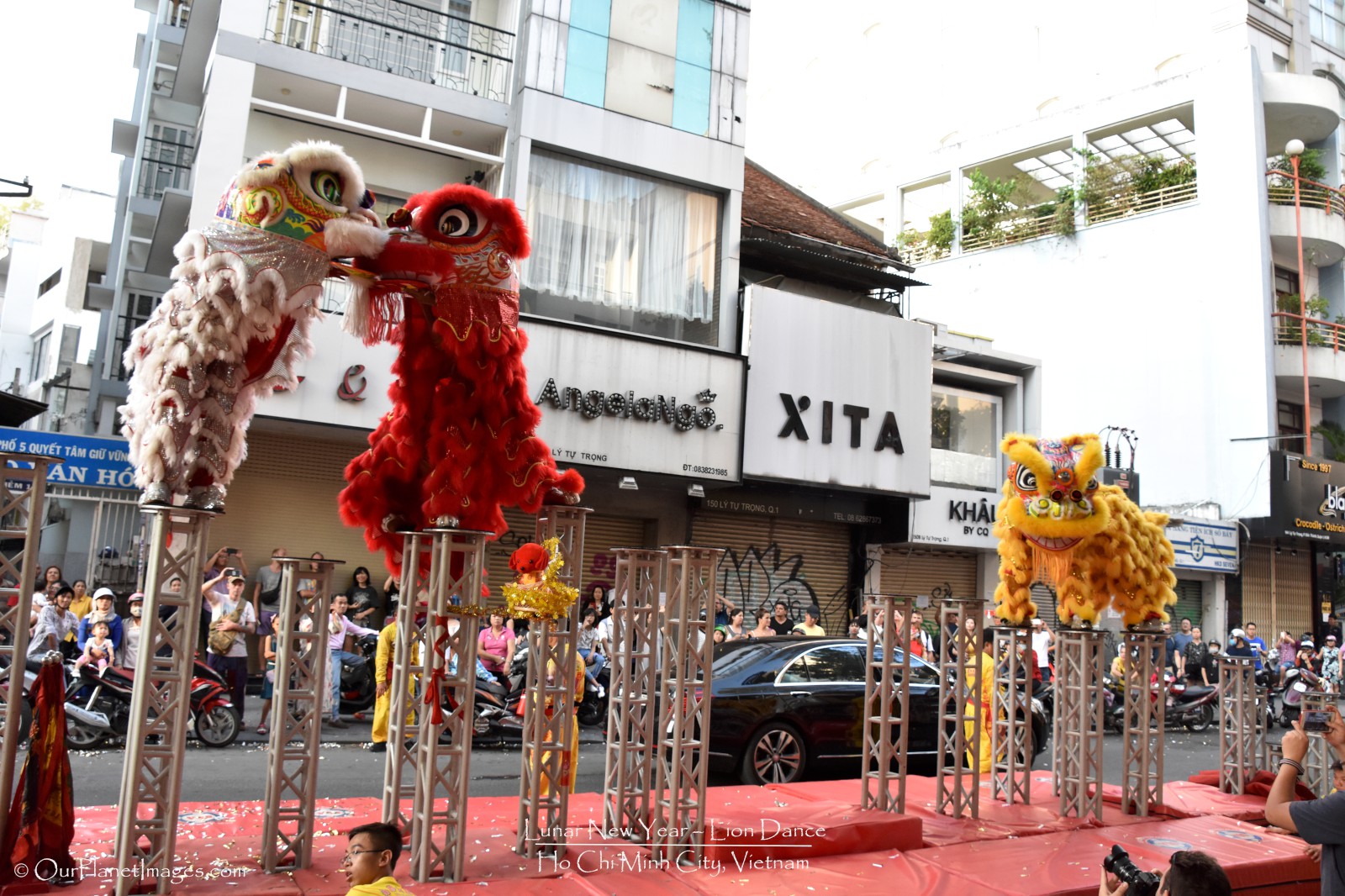 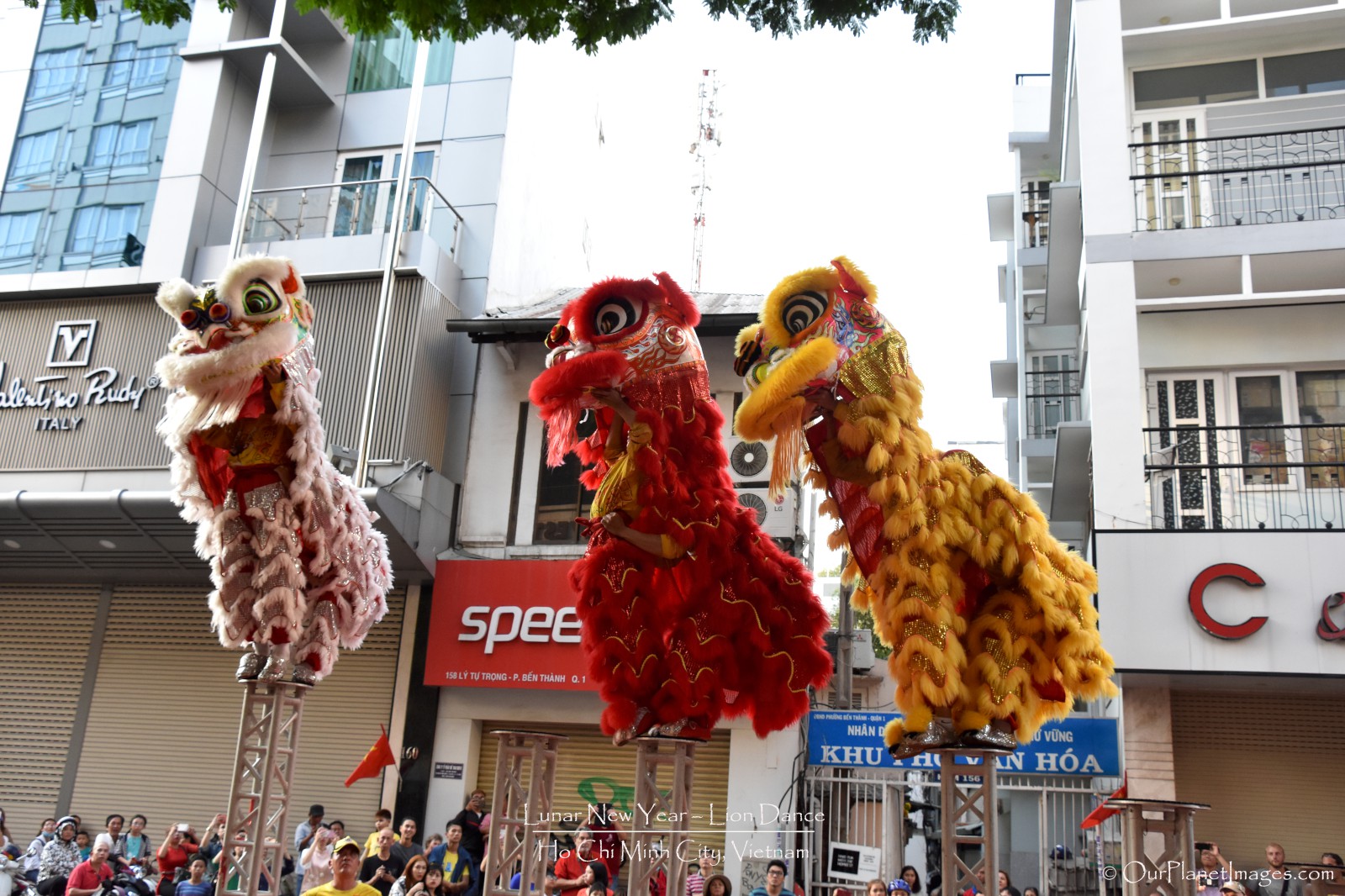 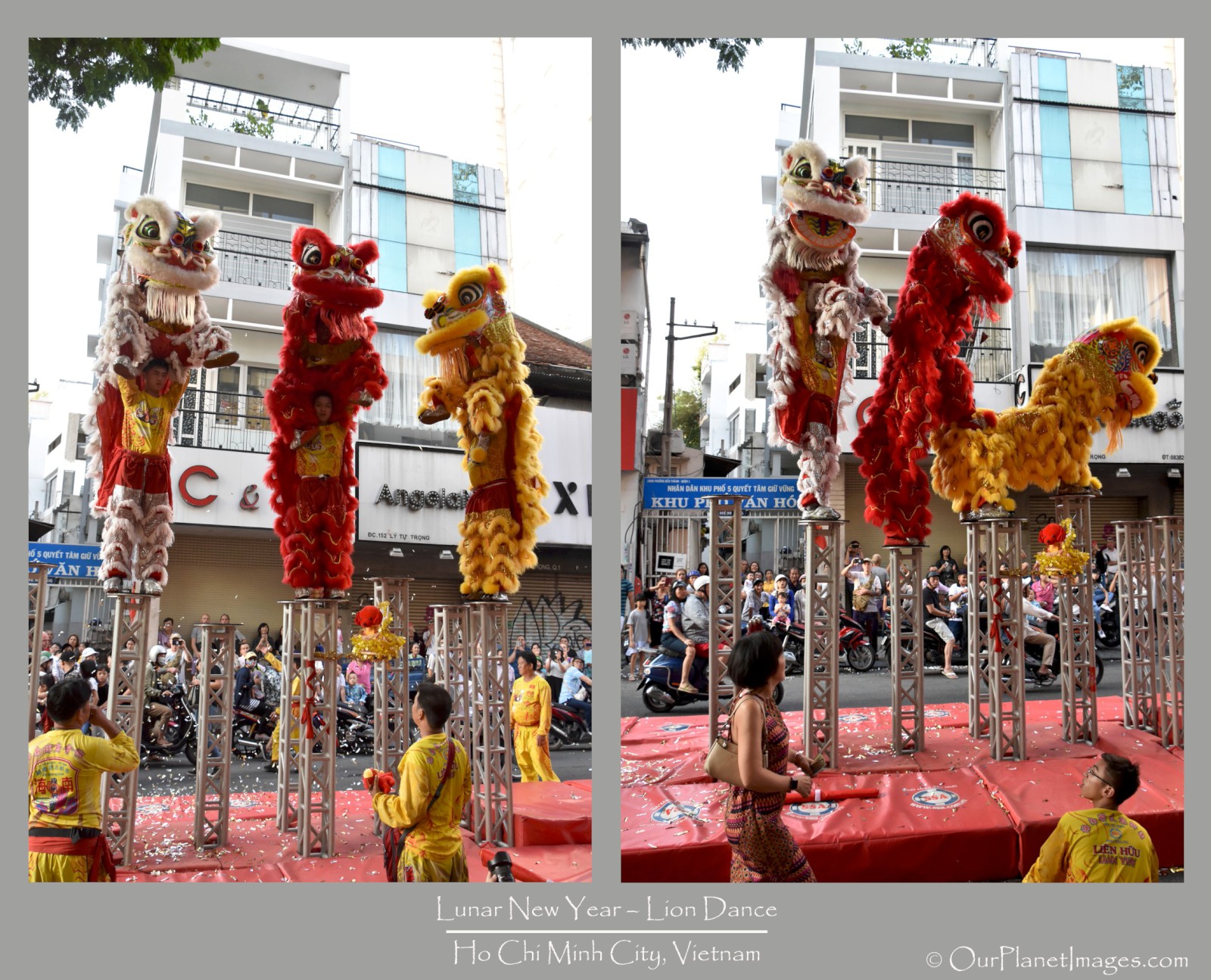 Lion dances are performed accompanied by music of beating drums, cymbals and gongs all synchronized to the lion’s movements and actions. The lions start off on the ground but quickly jump onto pole platforms and things really get exciting. The poles can be up to 3 meters high and up to 2 meters apart.

The two man teams jump in sequence and fly through the air to land on the next set of poles but they don’t land on the same set of poles. The head of the lion lands on two forward poles and the tail of the lion lands on the following set of poles. Seeing this jaw-dropping performance is amazing. The performers are from a lion dance club and are highly trained normally with martial arts or acrobatic school backgrounds. The best way for me to show this in photography is to group a single jump into a series of photographs. The following set of photos shows a single jump in three photos (The jump goes from right to left). 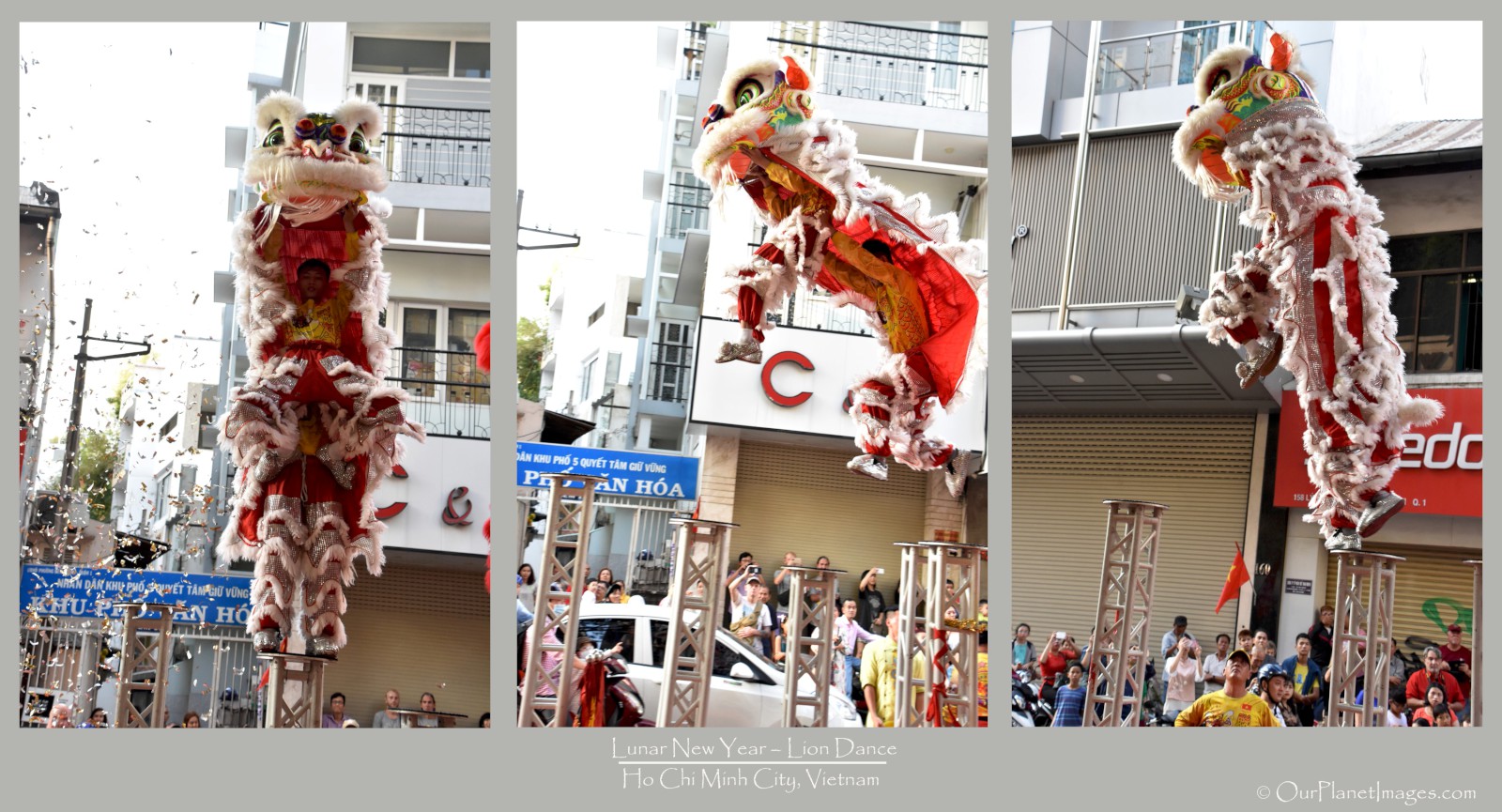 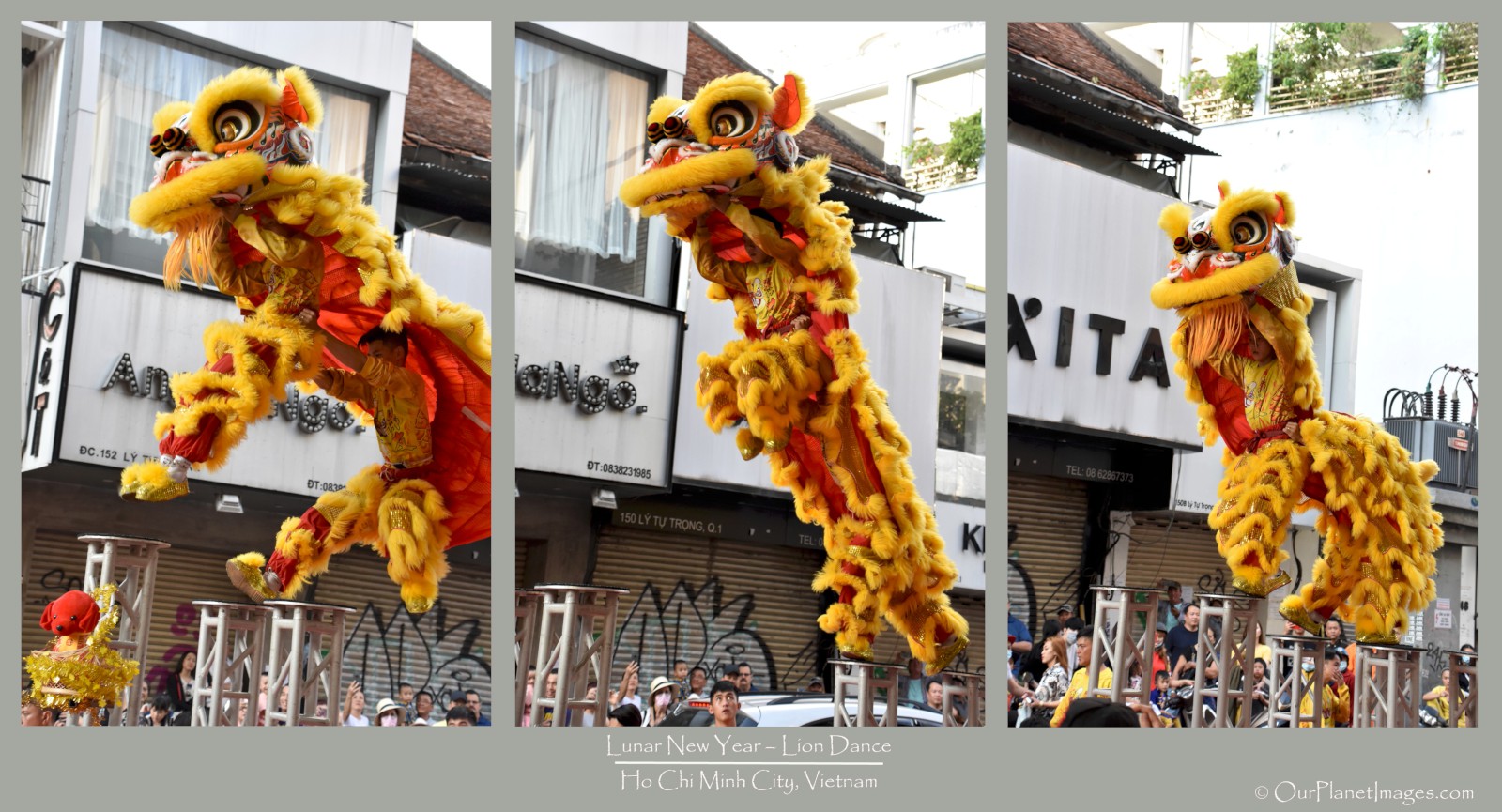 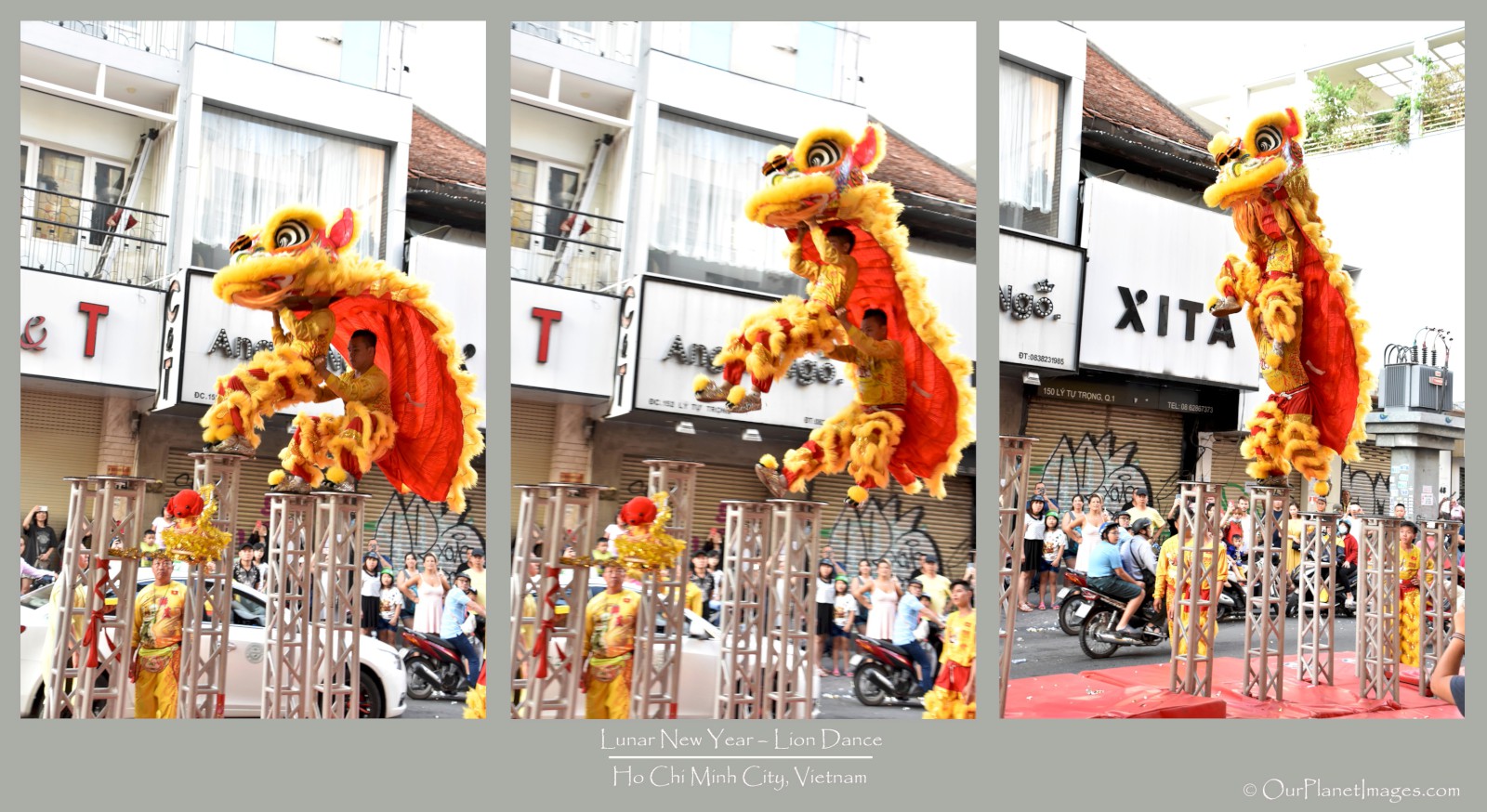 The final set of photos shows a single jump in 6 photos. I grouped this jump in 2 sets of 3 photos. (In both sets, the jump goes from right to left). 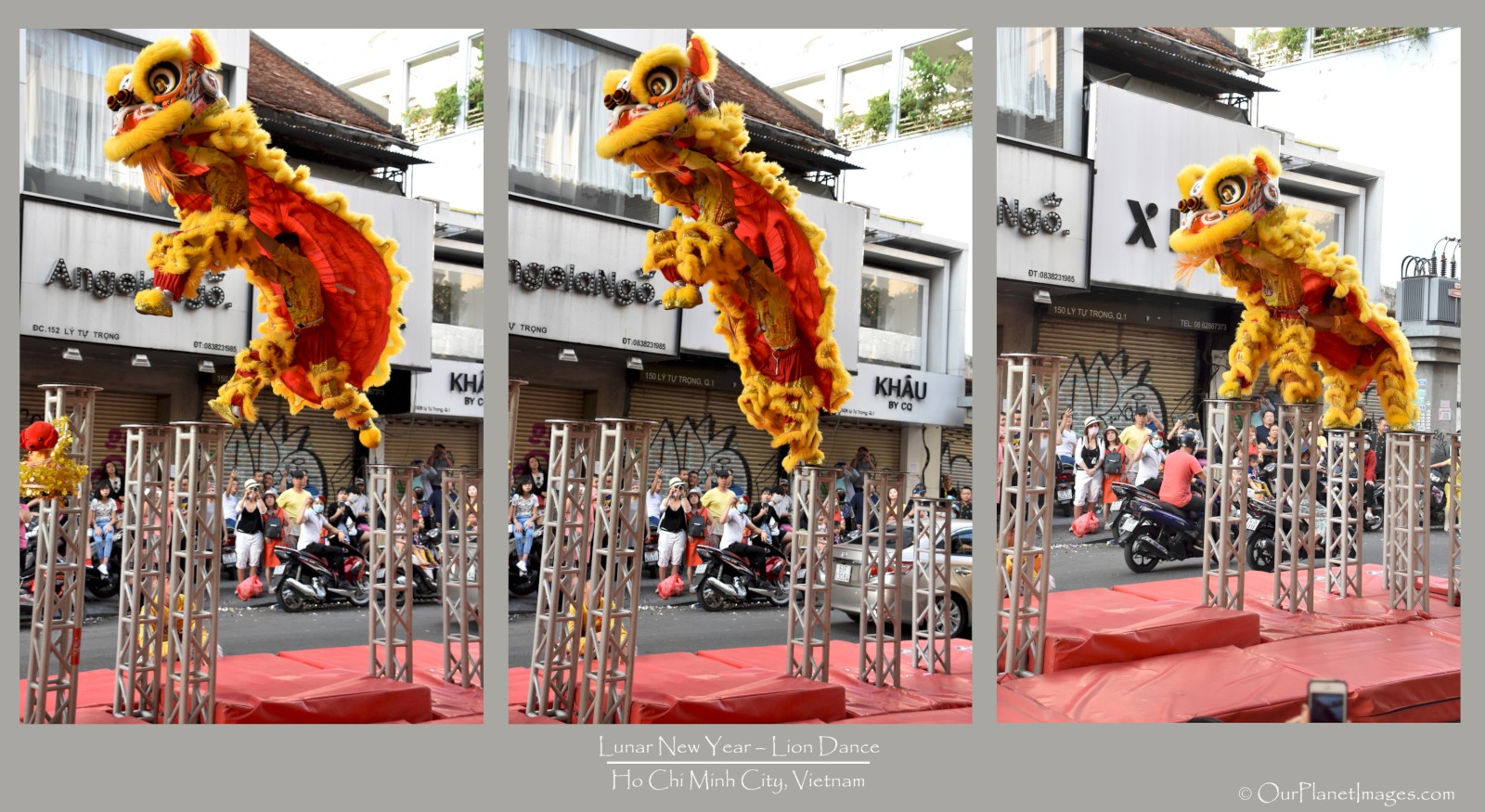 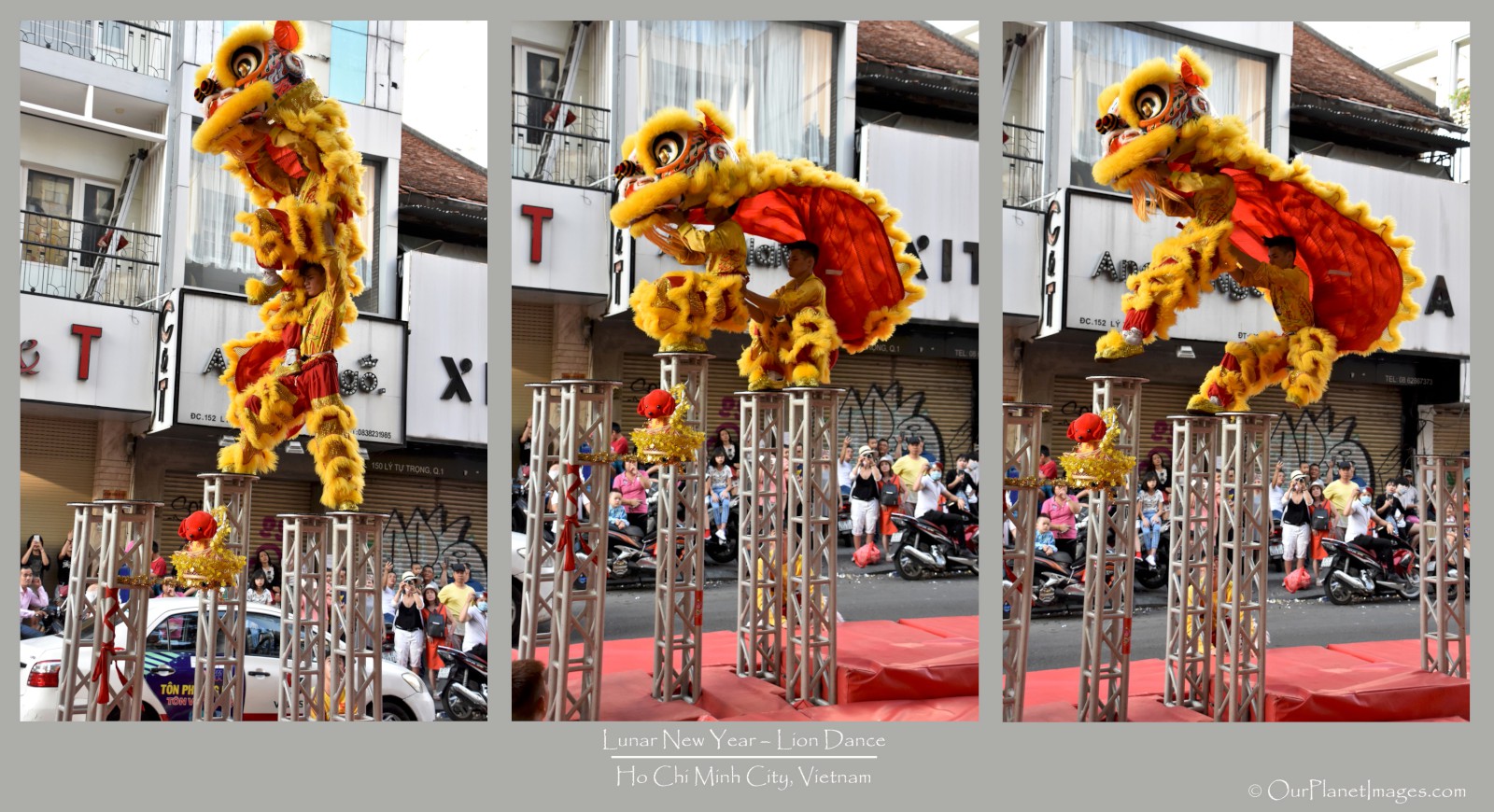 The northern lion’s costume is different than the southern. It has longer hair and is traditionally red and yellow colored.

The northern lion dance is performed in pairs with a third person holding a ball for the two lions to chase. The pair of adult lions is made up of male and female. The male has a red colored ribbon on his head while the female has a green ribbon on her head. This dance is a very active and playful dance with the male and female actively chasing after the ball by leaping over objects and spinning around in 360 degree stunts. 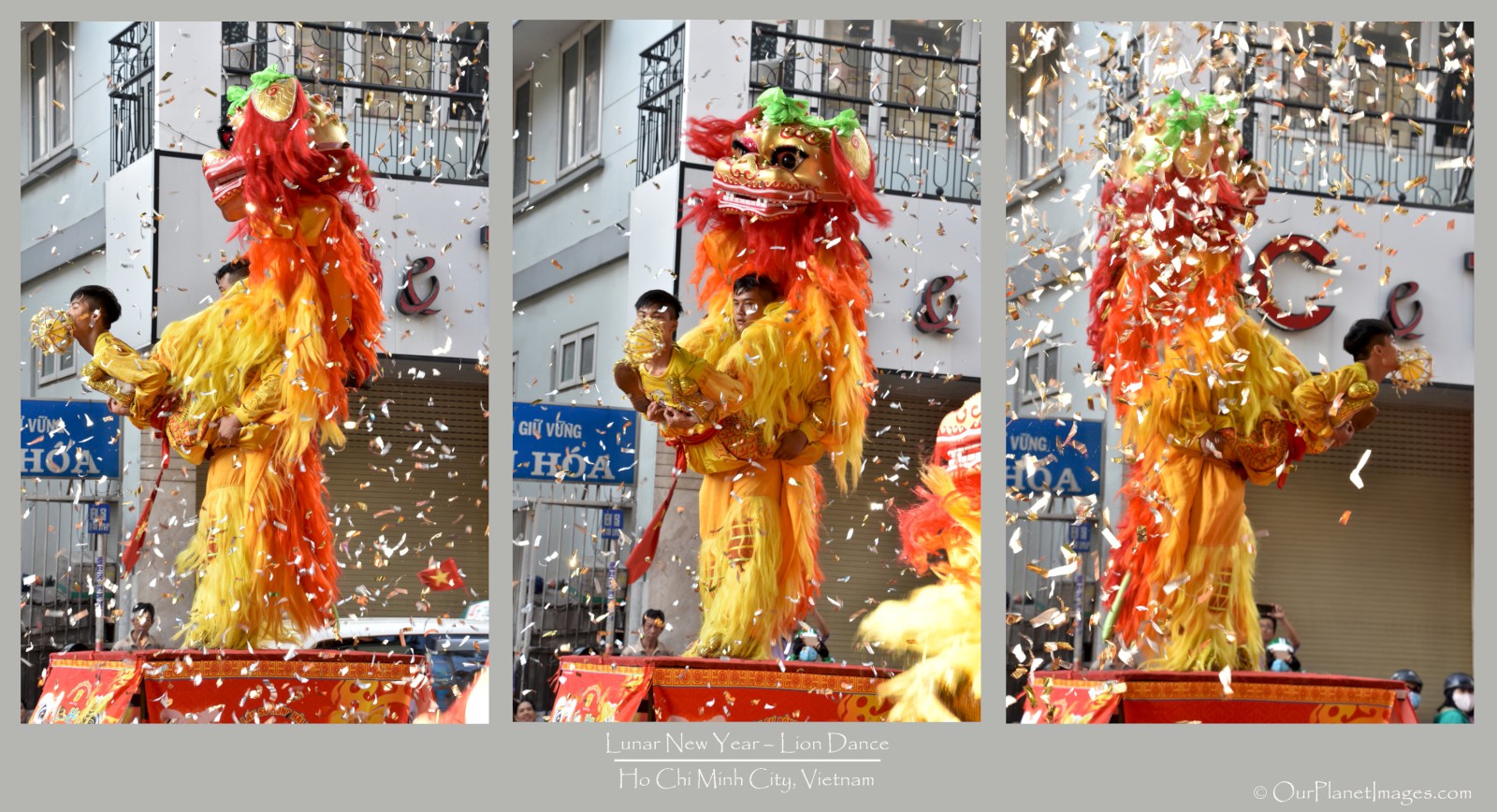 Watching a lion dance is fun and truly amazing. The music is loud, the performers are entertaining and entire show is a celebration. 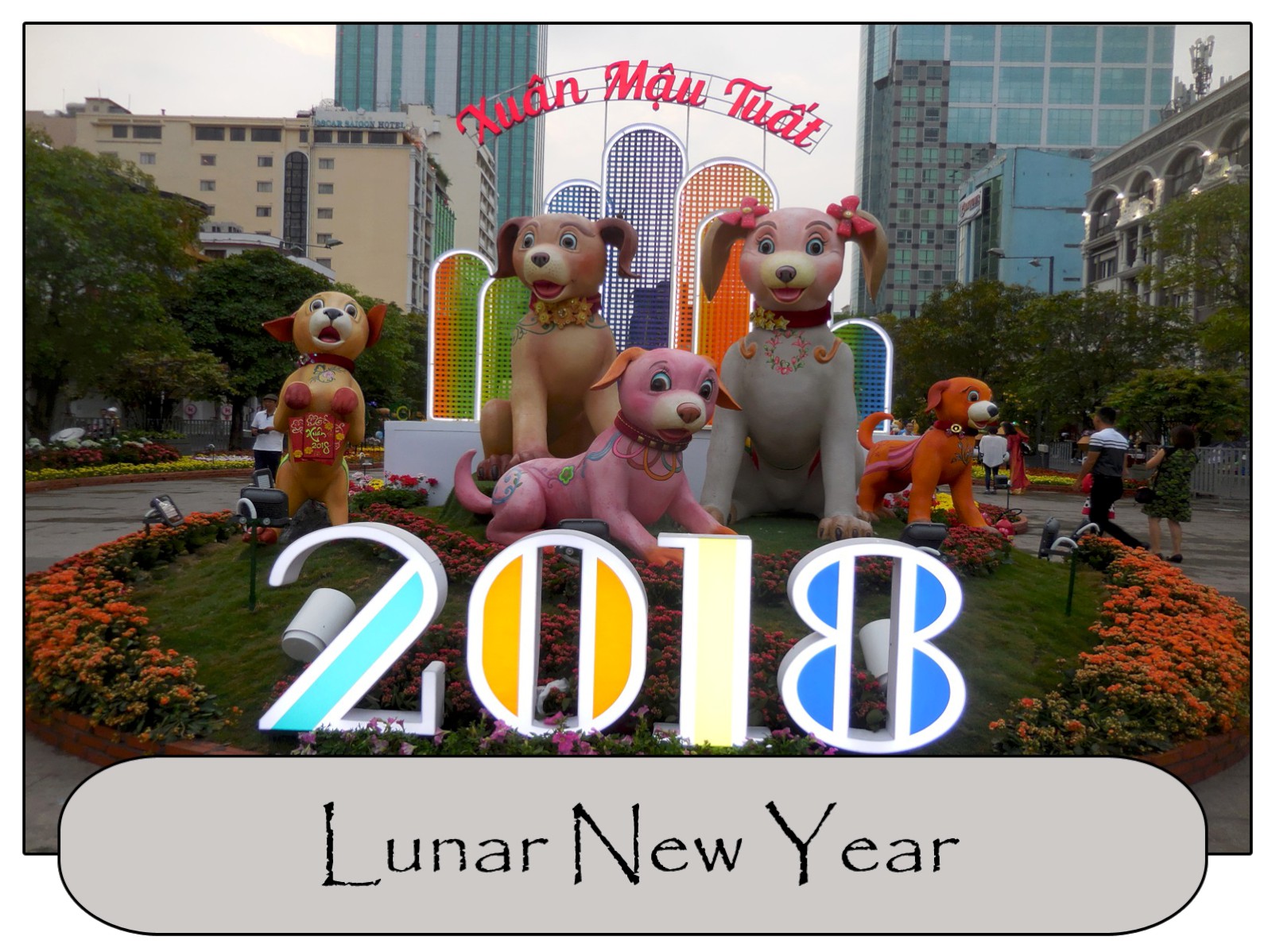 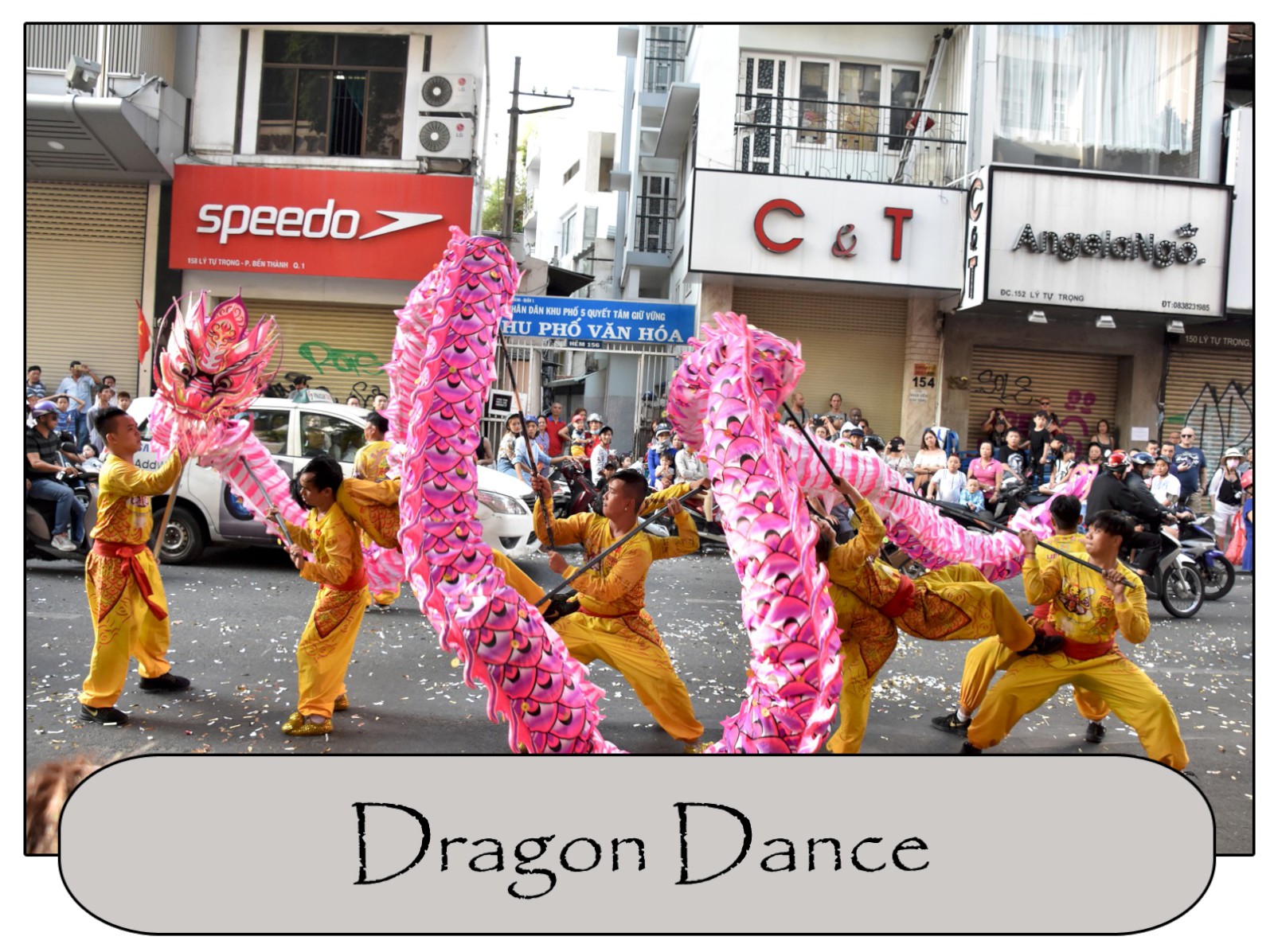